1) Do you have someone to wear each of the 3 hats?

A: I don't have someone who knows what they want.

A: I don't have someone who knows how to provide what I want

A: I don't know whether we have enough money.

This sounds very simple. It is not. Many many conflicts in personal life, disastrous work projects, and famous cockups in politics follow from the fact that helping person A to express what they want well enough so that person B can deliver it for them is a skill that takes time to learn.

Solution: hire a Business Analyst to help person A to express what they want and to express it as requirements that persons A and B can both agree they understand and are happy with

1) Does anyone involved have previous experience of how easy it is is to trip up on getting someone to express what they want correctly and in enough detail for someone to deliver it?

This sounds very simple. It is. The only two things that can possibly go wrong are:

You may think that offering a price for a job is what any experienced tradesman should be able to do. You may, or may not, be right. There are 3 main risks:

1) Make sure you have reviewed each of the 2 to 3 times multipliers for inexperience in Requirements and Prioritisation.

2) Do you have someone on the project with enough experience to estimate a budget?

Note you are not asking, “is the thing we are delivering good?” You are asking “is the way we are working good?” The two things are closely linked of course, both in the positives and the negatives.

2) Do you have someone on the project with prior experience in managing risk?

In nearly 15 years since the Agile manifesto was penned, an entire generation of the software industry has grown up having known only allegedly 'Agile' methodologies. Their experience has not always been positive.

The 'new' criticisms made against agile – by those who have grown up with it, not those who opposed it in the first place – are rarely criticisms of the agile manifesto. They are, often, reactions against the (abusive) experience of being pushed into processes, behaviours & relationships which are unsatisfactory; whilst at the same being stripped of any power to improve them.

We should always react against people being pushed about, and made powerless.

A manifesto is a small thing. It can fall on deaf ears. It can be interpreted to mean the opposite of what was intended, it can be misused to manipulate people. But if we make the effort to keep in touch with each other, and to keep trying to re-state what was meant, it can continue to be a valuable guide. And so I propose a 15th anniversary postscript.

Manifesto for Agile Software Development: A Reminder of the Original

We are uncovering better ways of developing software by doing it and helping others do it. Through this work we have come to value:

Four years after this book came out, Agile Architecture has at last become a Thing. But as the nuance of its title hints, this book is not fad-driven. It is a carefully-thought out exposition of what architects can learn from lean and agile ideas, and what they can do better as a result.

Well. It's partly that. If you are a practising architect, it is actually four must-read books in one. 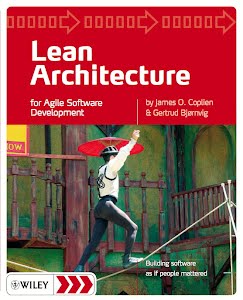 If you are not, you might dismiss this book for two reasons. The first, that judging by other reviews & my own experience, the homespun style of the first half does not suit a bullet-pointed gimme-the-headlines-now generation. The second is that if you have not experienced the pitfalls of architecting and doing software in a real organisation with actual people in it, then Coplien & Bjørnvig's pearls of wisdom may impress you much as the agile manifesto might impress a cattle rancher.

It is not a beginner's book. It is the mature distillation of the sweat-soaked notebooks of a fellow-traveller who has stumbled over rocky terrain, been through the tarpits and has some hard-bloody-earned (and, academically researched) wisdom to share as a result.

I said four must-reads in one. They are:

1) The (literally) decades of experience of a leading practitioner & thinker in the field.

2) A thought-through answer to the questions, what can we learn from lean & agile. Whilst value-chains and some technique feature, the authors' secret conviction is surely that Technology Is All About Human Beings. "Everybody, all together, from early on" is their Lean Secret. "Deferring interaction with stakeholders [users, the business, customers, domain experts, developers], or deferring decisions beyond the responsible moment slows progress, raises cost and increases frustration. A team acts like a team from the start."

3) Which leads to that which for me, as a more techy-focused reader, was the marvel of the book. Clements et al in "Software Architecture in Practise" offered attribute-driven design, a partitioning of the system based on a priority ordering of, primarily, technical quality requirements. Coplien & Bjørnvig all but deduce a partitioning based on the priority ordering of people: Users first, Development team next.

"The end-users' mental model" is the refrain on which they start early and never stop hammering. From this they suggest that the first partitioning is What the System Is from What the System Does. I am tempted to paraphrase as, Domain Model from Use Cases. But their point is partly that this also neatly matches the primary partition by rate of change, because the last thing to change in a business is, the business of the business. If you're in retail, you might change what and how and where you sell, but your business is still Selling Stuff. And at lower levels inside the organisation too: an accounting department, though there has been five thousand years of technology change, still does accounting. The users know this. They understand their domain and if the fundamental form of your software system matches the end user mental model then it can survive–nay, enable!–change and stay fundamentally fit for purpose.

These points seem to me obvious in hindsight, yet they turn traditional approaches to high-level designs on their head. After considering People, yes we can considering rates of change, quality attributes, technology areas. But it's always People First.

Firstly that use cases are mapped closely to specific pieces of code; in the best case each use case can be encapsulated in its own component.

Secondly, that the relationship between Domain elements and Use Cases are expressed as "In Use Case X Domain element Y plays the Role of Z". This brings significant clarity to both, and is part of the key to 'componentising' use cases; the Roles needed for a use case become, in the code, its public dependencies. In UML-speak, the Required Interfaces for such a UseCaseComponent are the roles needed to 'play' the use case, and those roles are Interfaces which are implemented by Classes in the Domain Model. Coupling is reduced, cohesion is gained, clarity is achieved.

Thirdly, the simpleness of the mapping from business architecture to code is greatly increased. Suddenly one can draw simple straight lines between corresponding elements of architecture and code.

The authors say of their work, "This book is about a Lean approach to domain architecture that lays a foundation for agile software change". To my mind, this hits the agile architecture nail on the head. Agile software development always only ever succeeded at scale because the people doing it either knew, or had given to them, enough architecture to make it work. Software Agility, just like every other software -ility, must either be supported by the architecture or it ain't gonna happen.

But the best thing I got from this book was the proof, before my very eyes, that correct technical design flows from knowing how to put the human beings central. 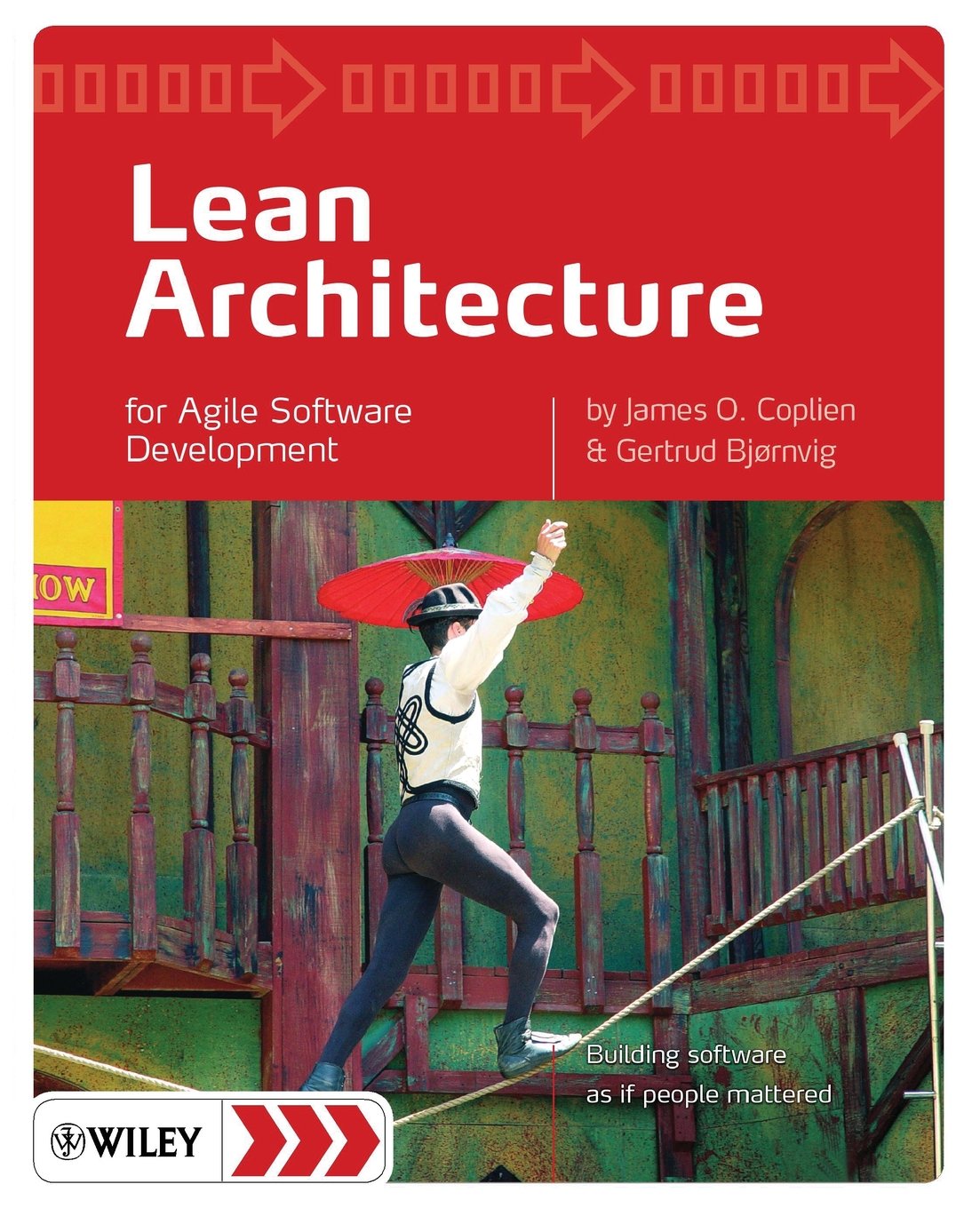 We had a debate&discussion at XP-Man on NoEstimates for which I did some notes. Reading the NoEstimates stuff, I was most attracted to the sense of "Let's not be satisfied with second rate" and of a thirst for continuous improvement.
I was left with the sense (possibly because I already believed it) that there are contexts in which NoEstimates works, and contexts in which it doesn't. But I was very glad to be provoked to ask in each case, "What value if any is our estimate/planning effort adding?" and "Isn't there a better way to deliver that value?"

What is an Estimate?

An estimate for a Project is (1) a list of things to work on; (2) a cost-range for those things; and (3) a list of risks, that is (3a) of Dependencies that 1&2 rely on, and (3b) of things that might cause significant change.

The value of a project estimate is to feed-in to (1) A go/no-go decision and (2) seeing things we want to see sooner rather than later (e.g. should we hire more people, do we need help from specific 3rd parties, is releasing in time for Christmas possible)

The value of a sprint estimate is, to see things we need to ask for in advance (ie external help or resources); to give everyone a sense of confidence about what we're doing; to fail-faster, that is to see sooner what we can't achieve.